Compagnon is a typeface family composed of five distinctive styles, inspired by specimens found in the online archives of Typewriter Database. Each style “is based on singular references relating to significant periods aiming to underline the evolution of typewriter characters as they are called.” Made at the Typography creation studio of EESAB-Rennes. 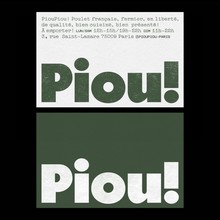