Designed by Berthold Wolpe in the early 1930s and originally titled Bismarck Schrift. Released as Sachsenwald or Sachsenwald-Gotisch (Series 457) in 1937. [Bryant] A second light weight was started, but it is unclear if it ever was released [Omagari]. A specimen reproduced in The calligraphic Tradition in Blackletter Type by Paul Shaw shows both weights.

The initial weight was digitized by Gerhard Helzel in 2015, based on the 16pt size. In September 2017, Monotype released a revival made by Toshi Omagari. It spans both weights and includes alternates for ‘HIXx’. 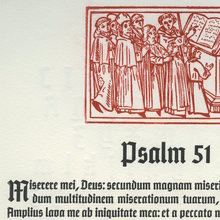