A collective term for the various blackletter types (sizes) cut and cast by the Caslon foundry in the 1700s and 1800s, also known as Caslon Black (not to be confused with the 1960s Letraset face).

“Caslon Text originated with William Caslon in 1734. Inland Type [in Saint Louis, USA] brought out a reproduction of it in 1899 as part of their agreement with the Caslon Type Foundry in England. It later became the property of ATF, and was copied by Linotype.” — McGrew

Caslon Text in use 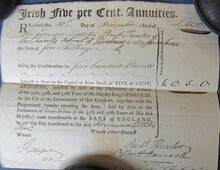