Designed in 1908 for the original Life magazine and released by Lanston Monotype in roman (series 38E) and italic styles. Heavily used by the Gimbel Brothers’ department store in New York and hence often called Goudy Gimbel. [McGrew] Not to be confused with Goudy Oldstyle.

Photo/digital interpretations and expansions include Gascogne (Brendel) and Goudy 38 (Les Usherwood/Red Rooster). The Light weight of the latter is used for the sample.

Goudy Light Old Style in use 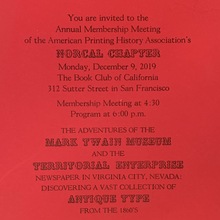