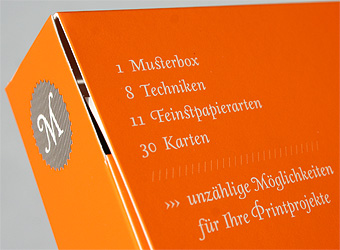 When Wolf-Manufaktur asked Wehr & Weissweiler to design a catalogue that showcases its high-end printing and finishing services, the two young designers from Mainz, Germany came up with a striking solution. The Wolf-Musterbox is a sophistically designed cardboard box in glaring orange. Once you lift the magnetically affixed cover, the box slides open and reveals its content. 30 sample cards provide an overview over the available offerings. Eight different finishing techniques have been combined with eleven types of fine paper and board. 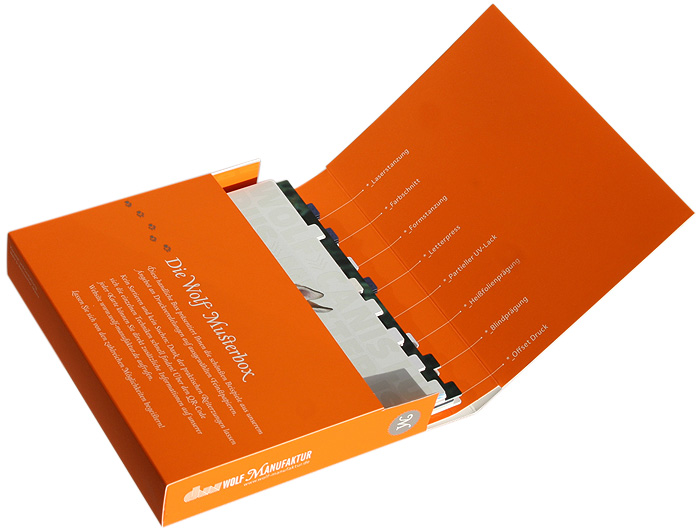 Wehr & Weissweiler aimed to create a tool that helps designers choose an advanced printing technique and convince their clients of its effectiveness. They further wanted to tell a little story that relates to the brand name: each motif contains some information about wolves. As you browse through top-notch examples of letterpress, gilding, or foil stamping, you learn why wolves howl, how fast they can run, or what the deal is with werewolves. The ingredients for the visualization are diverse: photography, illustration, infographics – plus a trio of fresh typefaces, namely FF Nexus Serif (2004), JAF Facit (2005), and Fakir (2006).

Each of the cards sports up to three tabs. Together with the legend that is printed on the inner side of the cover, this enables the user to quickly pick all the samples that illustrate, say, die-cutting. 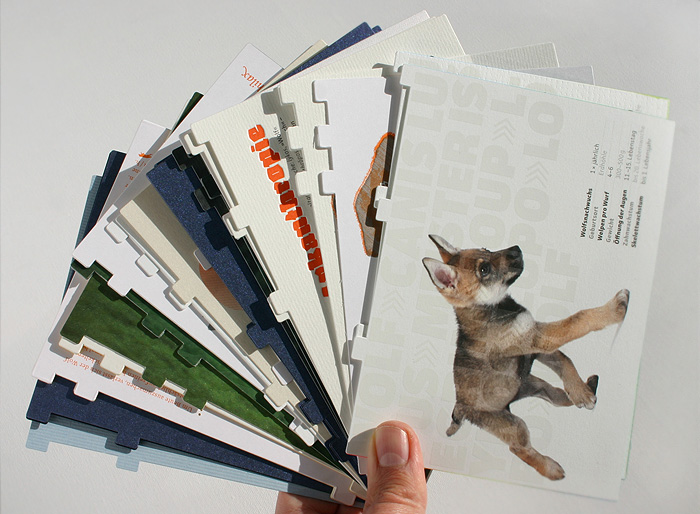 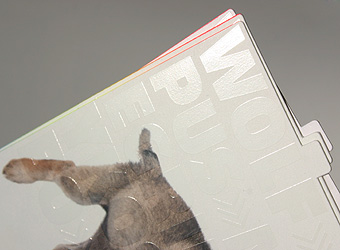 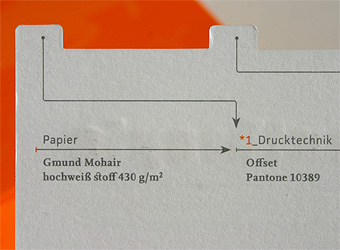 The back lists the type of paper and the printing and finishing techniques in use. It also holds some information about when and how these options are applicable. Headings are set in a lighter weight of JAF Facit, and contrast with text in FF Nexus Serif, which shows off its decorative ligatures. 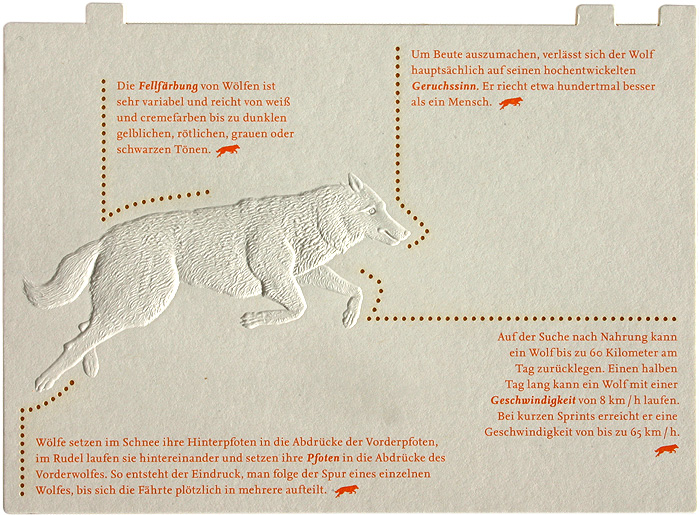 On this card, relief embossing is shown alongside laser punching. The texts provide information about the tracks of wolves, their coat colors, and their scent. Designers will note the wise use of variation in text alignment. 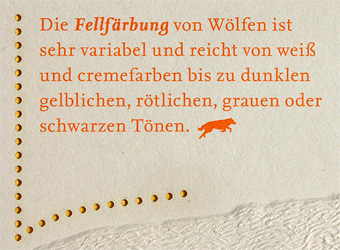 FF Nexus Serif is used for most of the text. It is a distinguished choice, and reads well even at the rather small sizes. Although the fonts are equipped with many extras (including small caps, arrows and other symbols) and ligatures (from ‘fi’ to ‘ffl’ and ‘ct’), FF Nexus doesn’t offer a good solution for words where the overhanging ‘f’ is followed by a diacritic. At least, that is what the typographer felt, and kerned the ‘ä’ away, to prevent the characters from clashing. This is far from ideal, as it creates a gap. However, many Germans feel this is the lesser evil – me included. 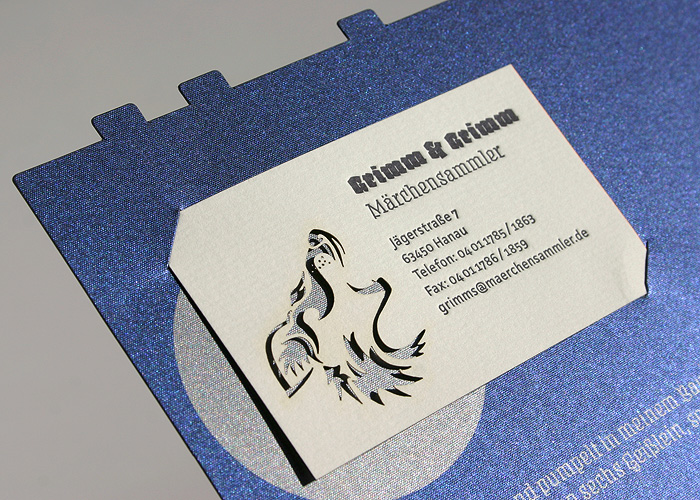 The most eye-catching type choice is Fakir, a blackletter as reimagined by the Underware collective. When this 11-style fantasy was released in 2006, it has been met with enthusiasm in the design scene, and even was celebrated with one of the prestigious TDC² awards. Still, Fakir can rarely be seen in use, due to its extreme nature, and not least because of the difficult connotations of the blackletter genre in general. Wehr & Weissweiler successfully employed two of its Display weights on this fake calling card for the Brothers Grimm. 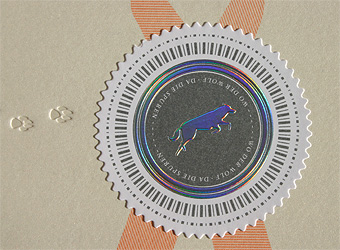 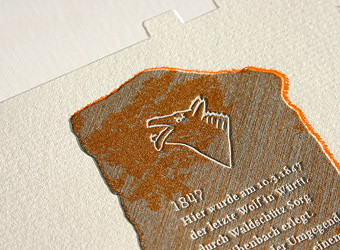 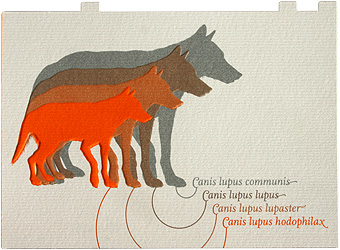 In many regards, FF Nexus can be described as an expansion of the ideas that Martin Majoor already incorporated in his first release, FF Scala. Both are superfamilies with a Sans and a Serif, and in the case of Nexus, also a Slab. Another feature that has been added in FF Nexus is a Swash Italic. The curly capitals and the flourished final forms can add a splendid calligraphic layer, as the Latin names for the various wolf subspecies demonstrate.

The Wolf-Musterbox can be ordered from the Wolf-Manufaktur website (which, by the way, is also designed by Wehr & Weissweiler, using JAF Facit Web). At € 89, the box certainly is not cheap, given it’s a promotional item. On the other hand, the amount will be refunded with the first order. If you want to know more about finishing techniques and wolves, and, to boot, are a sucker for beautifully staged contemporary type, it is a good investment anyway. 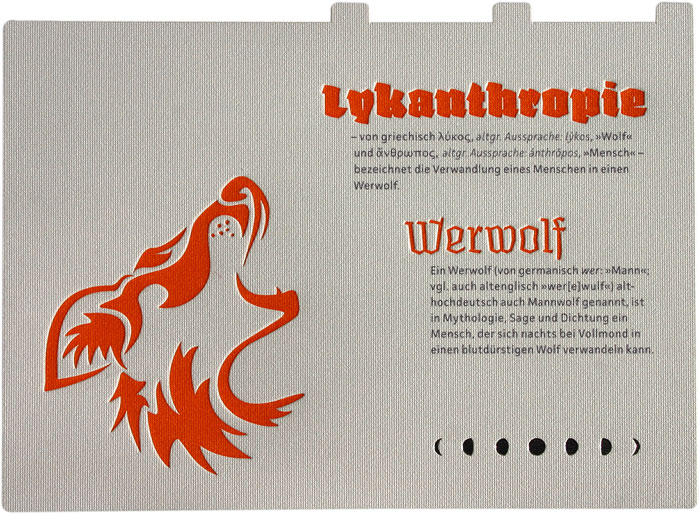 More Fakir in use