The old tech giant freshens up, but still looks like a follower.

Today, Microsoft announced a new logo using Segoe. It is their first logo change since 1987 and it certainly feels fresher than their aging mark in Helvetica Bold Italic. The typeface choice could be considered quite fitting. It follows the visual identity that Microsoft already established in their products and marketing for years, and it reflects the style of typography that is at the core of their Windows Phone and Windows 8 (formerly “Metro”) operating systems. But I think it’s the wrong choice. Or maybe the right one, but several years too late. 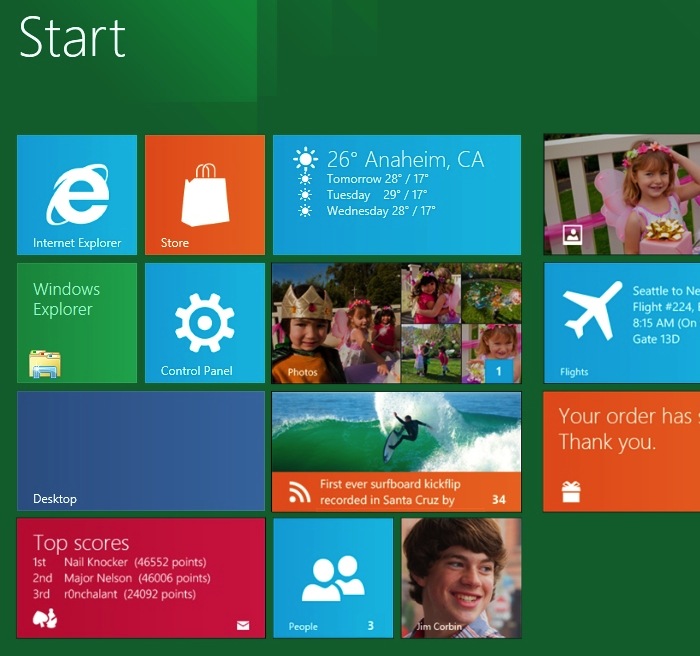 Microsoft Windows 8 represents a dramatic change from previous Windows versions. It’s built around a simple layout of “tiles” and the Segoe WP typeface.

Segoe is a typeface that is clearly inspired by Adrian Frutiger’s landmark 1975 design for the Charles de Gaulle Airport signage. Some (including the European Union) say Segoe is too similar to Frutiger, earning it the same derision that Arial gets for its similarity to Helvetica: Microsoft’s poor replication of a typeface they didn’t want to pay for. Perhaps it’s a hair-splitting rebuttal, but Segoe is not a Microsoft design or commission – it was an existing Monotype typeface that Microsoft licensed. But whatever the legal and ethical considerations, I have more respect for Segoe as a design than Arial. It doesn’t force itself into Frutiger’s metrics (letter widths and spacing) and designer Steve Matteson incorporated changes that – especially in the UI and WP variations – make sense for their intended use. 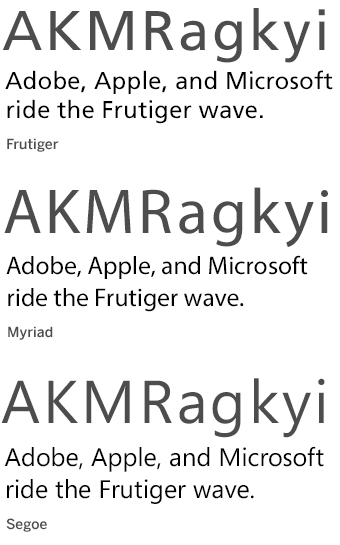 The problem with the new Microsoft logo isn’t really that Segoe is an unoriginal typeface, it’s that Segoe makes for an unoriginal identity. Last year, Sam Berlow noticed how a trip through the mall has become a monotonous typographic experience. A similar cloud of uniformity has now descended over the landscape of mainstream technology, which is now a field of brands set in Humanist type. Over ten years ago, Apple shifted away from its condensed ITC Garamond to Myriad, Robert Slimbach’s interpretation of the Frutiger model. (Adobe also uses Myriad quite often, although a new identity face was announced in 2009.) There are signs that Myriad is growing stale in Cupertino – Helvetica is gradually becoming Apple’s first choice on the screens of its devices, and we could see it replace Myriad in their marketing as well – but for now, it is clearly the face of Apple. And to most viewers, Myriad and Segoe are essentially the same thing.

Of course, there is more to a visual brand than the typeface. How Microsoft uses Segoe can determine its personality. Looking at the homepages of Microsoft and Apple one sees some obvious differences: Microsoft is wisely echoing the Metro UI, predominantly white type aligned to the sides and corners of brightly colored boxes, while Apple floats black Myriad in spare white backgrounds in the same tried-and-true way it has done for over a decade. Still, the implementation isn’t enough to propel Microsoft as a recognizable brand. Their homepage is fairly dull, almost like a stock web template. And while I commend the daring simplicity of the symbol in the new logo (a welcome attitude in the wake of recent gradients and drop shadows), it has the same effect as the website design: so basic it’s banal. 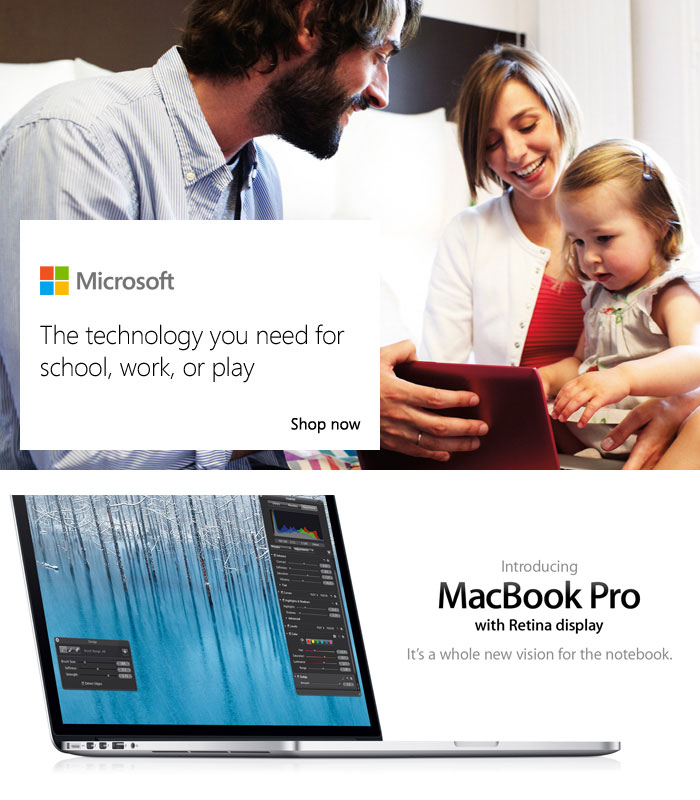 Main imagery from the current homepages of Microsoft.com and Apple.com: typographic brothers.

Some comments on the “Monotony of Retail” article suggested that Sam’s call for variety was missing the point. The goal of a major consumer brand isn’t to grab the public’s attention, or even to distinguish oneself. The goal is to make shoppers feel comfortable. Familiarity breeds trust. Two or three years ago, I would have said this approach falls in line with Microsoft’s culture and identity: trying so hard not to offend that the result is bland, routine, expected. But ever since they first revealed Metro, a UI design language that is truly innovative and new, I got the feeling Microsoft was making a real effort to be a leader. Yet, in using a Frutiger-esque typeface for their logo and visual identity, they simply resume their position as a follower, appearing (in spite of their innovations) many years behind the curve.

15 Comments on “The New Microsoft Logo”

Contributed by Will Miller