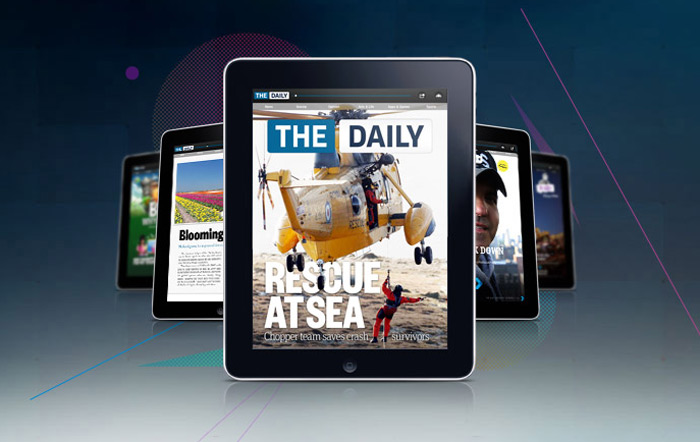 Founded by the world’s most notorious media magnate, preceded by months of speculation and fanfare, and backed with unusually strong support from Apple, The Daily is the most anticipated digital publication since publications went digital. It claims to be the first daily newspaper designed specifically for the iPad. This is not an adaptation of an existing print publication, but an entirely new operation, built from the ground up within the age of digital delivery. So what does that mean for The Daily’s typography? Let’s take a look. A screenshot from The Daily iPad app (Feb 2, 2011 edition). Click any image in this review to see the screenshots at actual size for a more accurate representation of the typography as seen on the iPad.

The Daily is less a newspaper than a daily magazine with a bit of news. Others have already commented on how the content leans heavily towards sports and gossip. The editor — Jesse Angelo, also of the New York Post — was noticeably prickly at the launch event when asked what percentage of their resources would be devoted to long-form investigative reporting. While the content is on the lighter side, the design isn’t frivolous or cute. It’s not Gray Lady formal, but it does have the look of a fairly serious weekly news magazine. Much of this posture comes from steering clear of ultra-modern or casual typefaces and choosing the more conservative Founders Grotesk, Kris Sowersby’s ode to English Grots of the early 1900s. Sowersby toned down the idiosyncrasies of the old types, but not their heft and directness.

Founders Grotesk has tight spacing, which works well for most of the headlines. Unfortunately, The Daily doesn’t loosen the tracking for captions and other smaller settings, which strains readability. Sowersby’s philosophy for Founders was to space the fonts for display use because users “can obtain better results by opening tight spacing for text, rather than closing loose spacing for display.” I’m not sure I agree, but I’d love to hear other type designers’ thoughts on that strategy.

Founders is a large, full-featured family with three widths of five weights each. The Daily makes good use of the two condensed members, often in all caps. While the choices are too light for small stuff at times, most of the type set in Founders looks great. 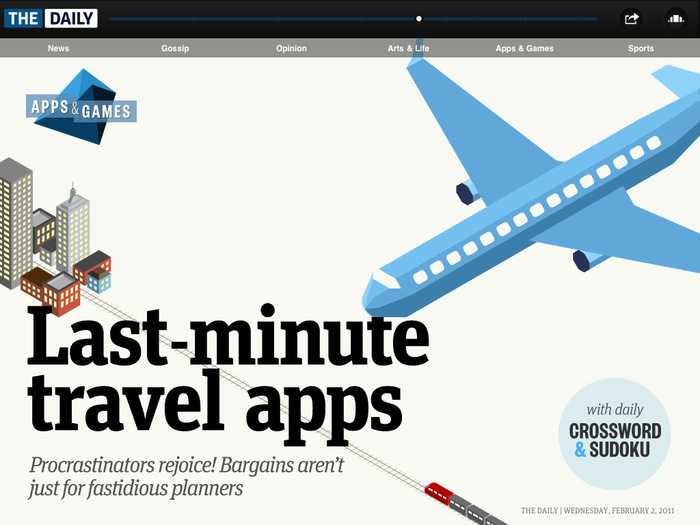 FF Unit Slab modernizes the magazine and adds a European touch. Designed by Christian Schwartz, Erik Spiekermann, and Sowersby, it is no-nonsense yet novel, rarely seen by American readers. The choice would be even more original if the family had not been snagged last year by Metro, a free daily commuter paper with local editions around the world.

Unit Slab is extremely versatile, getting the job done in headlines (with tightened spacing), decks, folios, and infographics. Its low contrast and sturdy serifs serve it well for small and reversed type too. I only wish The Daily would use it in these spots more often. 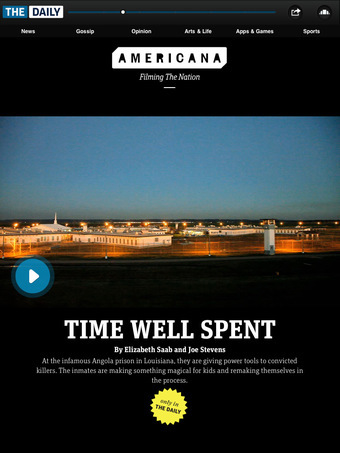 Founders Grotesk is modified for a special section logo in this story opener. 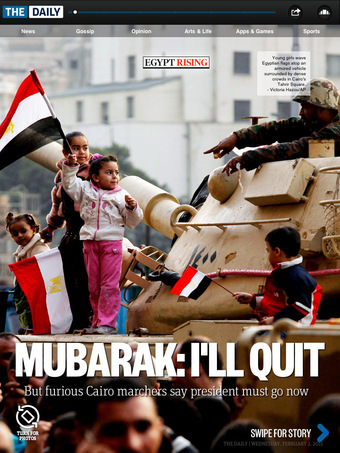 A story opener when viewed in vertical orientation. When the iPad is turned to landscape mode it becomes a photo gallery. 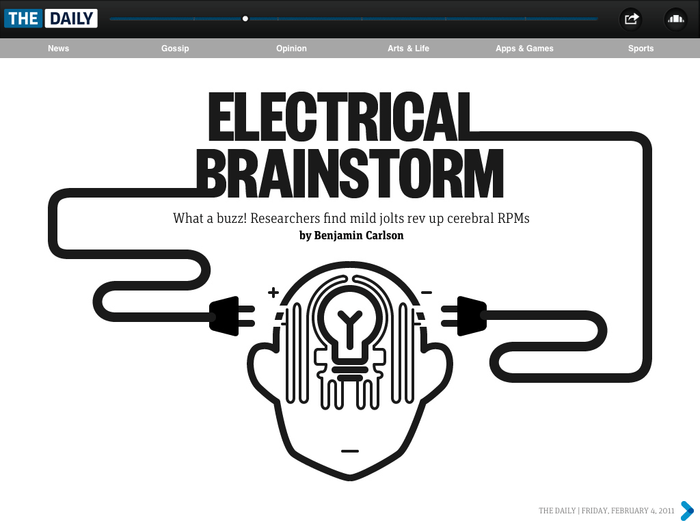 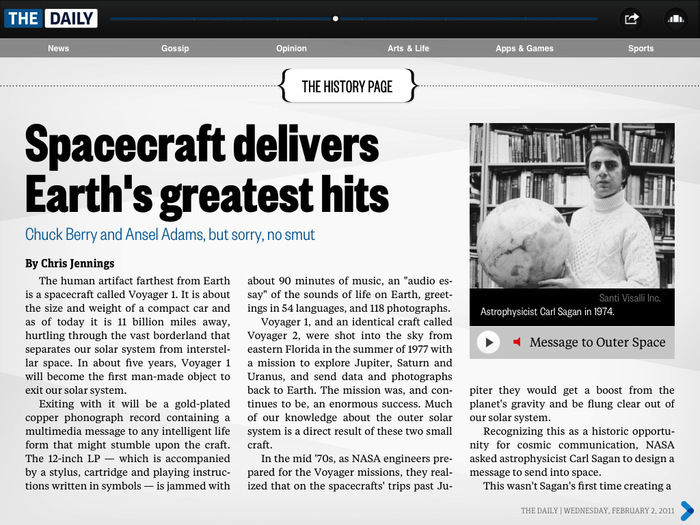 Tiempos Text delivers The Daily’s text and some of the trim. Another Sowersby typeface, Tiempos is a modernization of two classic newspaper faces, Plantin and Times New Roman, with more rugged strokes and serifs, more open counters, and more space-efficient proportions. The iPad screen treats Tiempos nicely. In fact, the face performs as well at the same sizes as Georgia and the New York Times app’s Imperial, which is an impressive feat.

Type as rendered by the iPad: Tiempos Text in The Daily app, Imperial in the New York Times app, and Georgia in Mobile Safari. 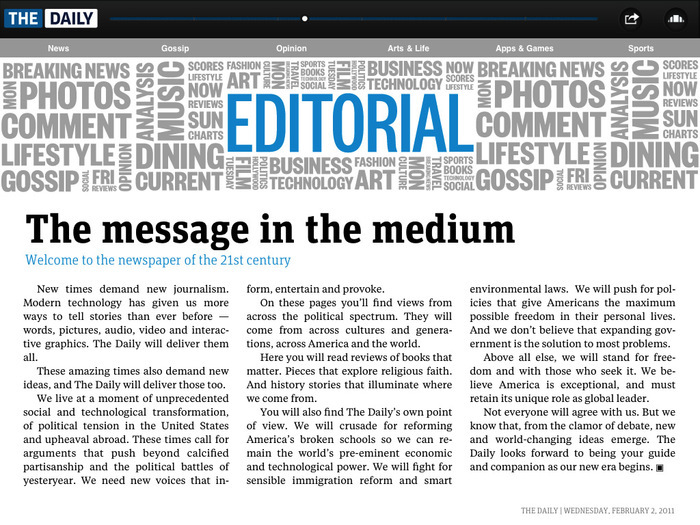 Text typography is still the weakness of nearly every iPad publication. Presented with a device that echoes the dimensions of a printed page, designers — especially those in the news world — feel obligated to stick with print conventions: static text set in justified columns. The Daily suffers the same shortcomings. When the columns are wide enough (see above) full justification works. When columns are any narrower (see below), letter- and word-spacing stretches to distraction, even with hyphenation. I admire the way text layouts change when switching between vertical and horizontal orientation — pull quotes often pop in when appropriate — but the typesetting requires more attention. Articles rarely scroll, but when they do, it works just fine. It makes one wonder whether the very short story lengths are a preference of the design staff or an editorial staff unwilling to put more meat on the table. 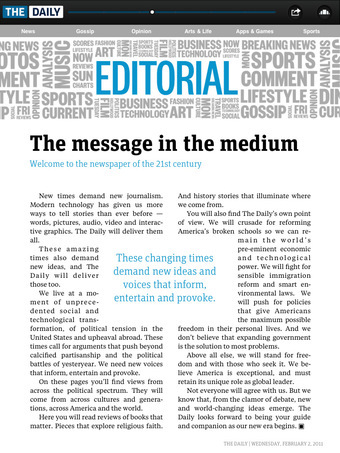 The same article pictured above in vertical orientation. 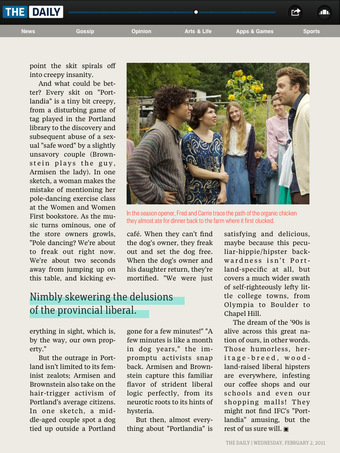 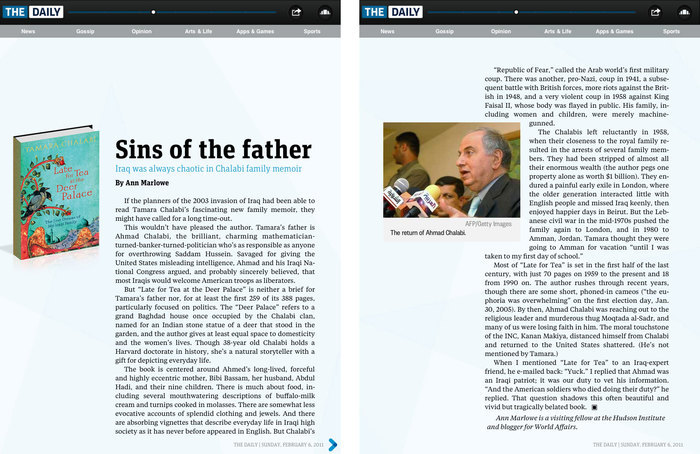 In this vertical layout, text runs in a single column over three pages. The reader pages through the article by swiping.

Readers cannot resize or select text in The Daily, which is disappointing but common in today’s tablet publications. It’s difficult to build layouts that are flexible enough to accomodate text of any size. The solution, for longer stories at least, is to let go of a traditional print mindset and learn something from the web. In a single-column layout (see above) word-spacing is not a problem until the font size gets very large. And if the article is read by scrolling, rather than paging, articles can be any length. 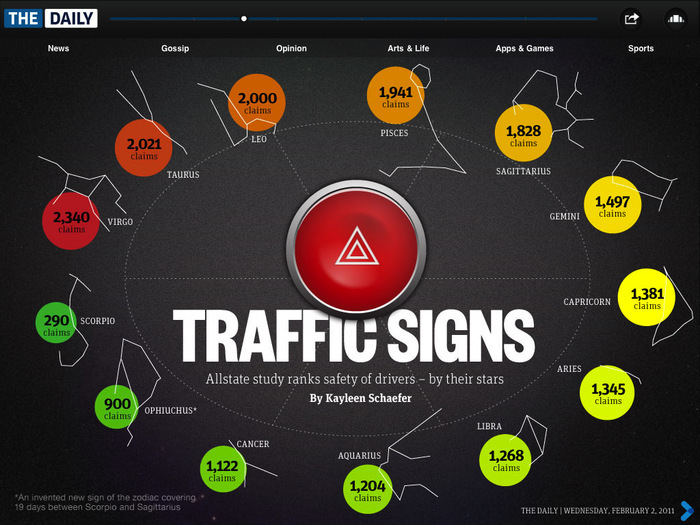 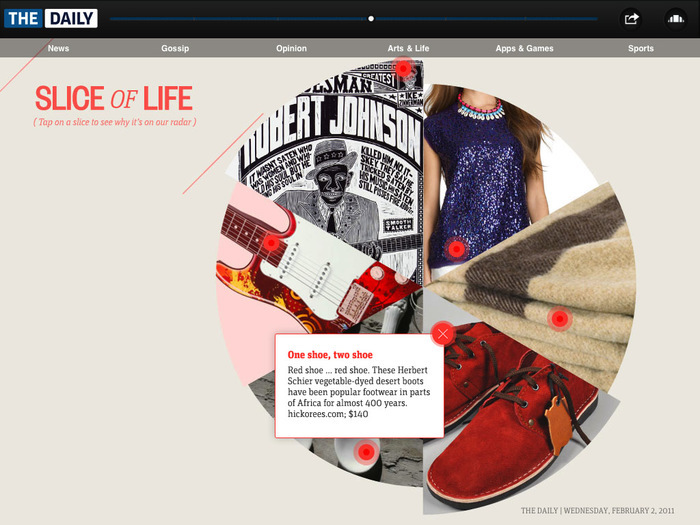 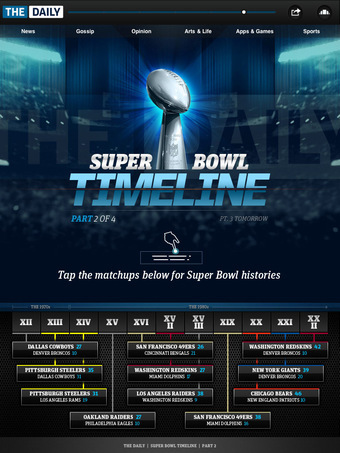 Before: an interactive infographic on Super Bowl history. 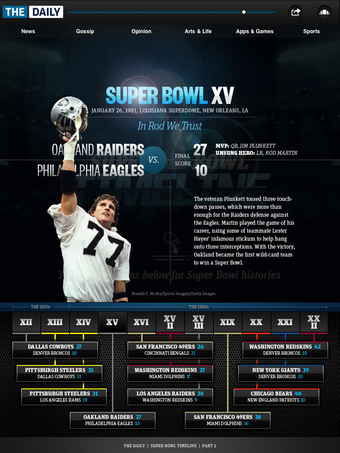 After: tapping on a box reveals details about that Super Bowl.

For me, information graphics are the aspects of tablet publication design that show the most promise. Touch interactivity presents an opportunity to make complex data more interesting and easier to understand. It also saves room and page flipping — features that would occupy several pages in print can be condensed using touch actions to show and hide different elements.

The Daily is just flirting with this, offering a handful of interactive pages in each issue, but they are on the right track. A good example is the Super Bowl graphic (above) in which eleven years of history are clearly presented on a single page. Unit Slab is just right for the topic and the demanding setting. 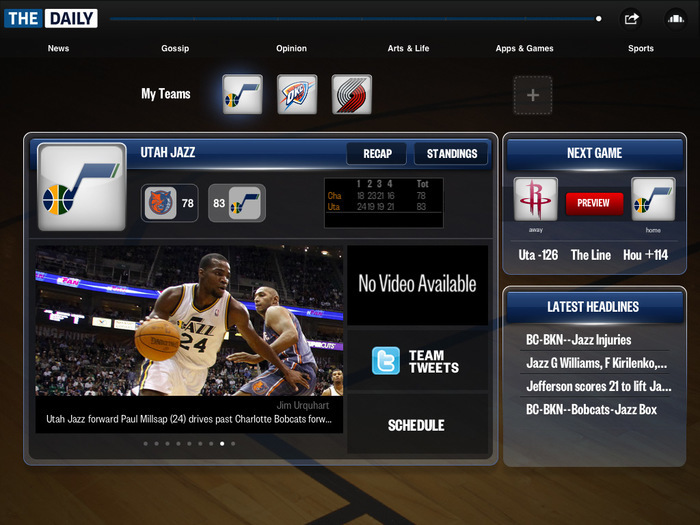 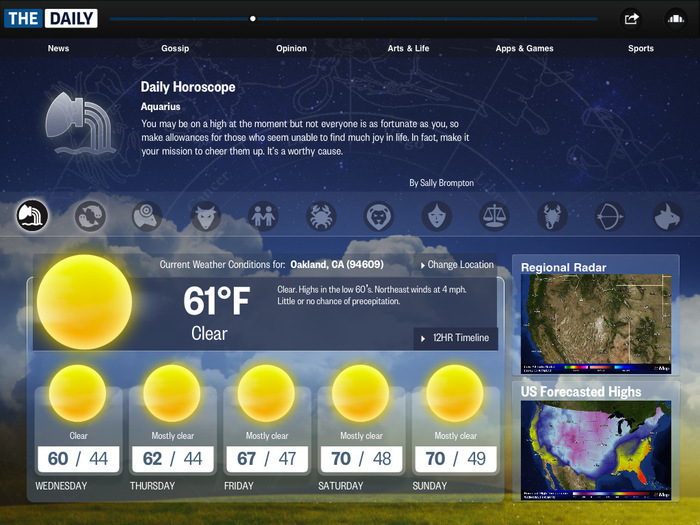 The same trio of type families are used throughout The Daily which keeps things cohesive. While Sports and Weather pages feel more “live” and interactive, the identity typefaces confirm they are part of the same publication. This is one area, though, where the designers use a weight of Founders Grotesk that is too thin and close-fitting for small, reversed text. The Weather page could be more interesting and useful if nearly half of it weren’t dedicated to silly horoscopes, but I suppose this is just another indication of The Daily’s intended audience.

Kinks to be Ironed 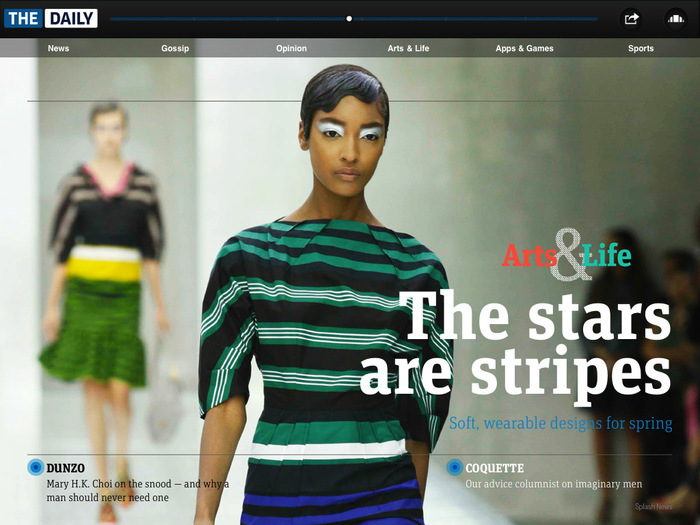 FF Unit Slab is usually tracked tighter in headlines, but someone forgot to apply that style here. 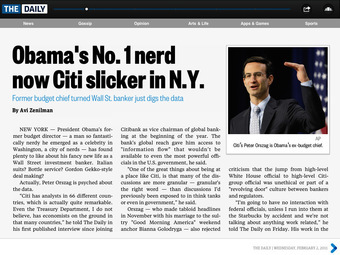 Straight apostrophes rear their ugly heads in headlines and captions. 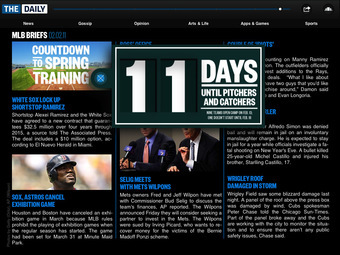 A nice popup in Founders Grotesk. But text set in Helvetica. Why? Tiempos or Unit Slab would do fine here. 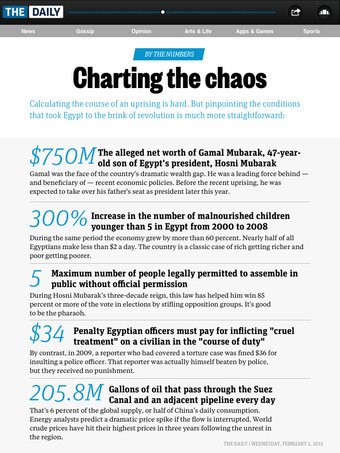 Here, all three typefaces work well together on this page, but spacing is inconsistent and the numbers are floating a bit. This is a job for lining figures.

The first few issues of any new publication are bound to be wrought with errors. The Daily is no exception. Sometimes kerning is missing and overshoots get clipped. Straight single quotes often stand in for apostrophes. Helvetica occasionally intrudes. Each issue needs a better table of contents for swifter navigation. But most of these seem to be errors of omission, rather than poor design direction. My guess is that the style guide is still being written, staff is still getting comfortable with the format, and everyone is still learning what’s possible in this new medium.

Those who were hoping for a more radical approach to a tablet publication will be disappointed, but I found the overall experience to be readable and enjoyable, albeit with minor annoyances. I could even see myself reading it every day, if I found more of the stories worth reading. After all the hoopla, The Daily isn’t earth-shattering, but it presents itself as a magazine to be taken seriously, even if its content doesn’t.

More Tiempos in use

NIPKE, laboratory for beer and spirits2017