Atlas of the Conflict

Good typography and a well-planned layout sorts and illuminates the complex history of Israel and Palestine. 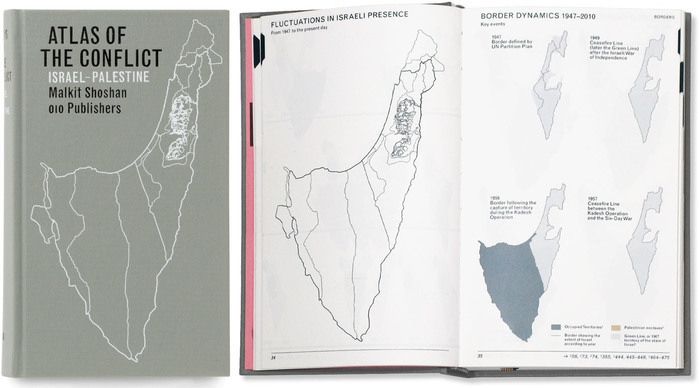 It’s no secret I’m a devotee of the work of Dutch book designer Joost Grootens. Well known for his big and splendid atlases on environmental and urban planning, his most recent one — “The Atlas of the Conflict” — is a small, slim volume for a change. A dense, meticulously researched documentation of the relationship between Isreal and Palestine over the past 100 years. 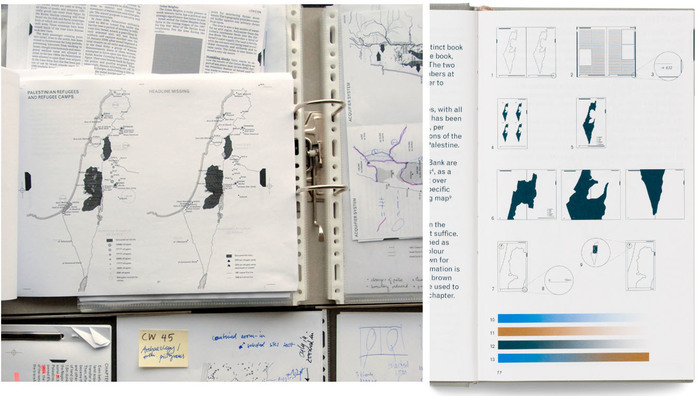 The making of the book and its design concept.

Nothing regarding the design is arbitrary. The format of the book is coordinated to the dimensions of the Israel/Palestine stretch of land, showing mostly only a single map per page, to “allow a concentrated reading of the maps, with all their subtleties in content […] and to avoid distraction” as Grootens puts it in his intro. Only two colors are used in this part, representing both parties — Israel in blue and brown for Palestine. All other information not directly attributed to one or the other is printed in a mix of both colors. The quality of the printing, done by Lecturis in Eindhoven, is impressive.

Though the topic is complex, Grootens made the layout as perspicuous as possible — a tough task. Figures and facts are made accessible in two parts. The first three quarters of the book contain detailed maps and info graphics covering all relevant facts concerning demarcation, development of settlement, refugee flows and camps, cultural heritage etc. The following lexicon part, printed on a different, thin paper, comprises all source material. The two sections are linked through many cross-references and pagination at the bottom of the page. 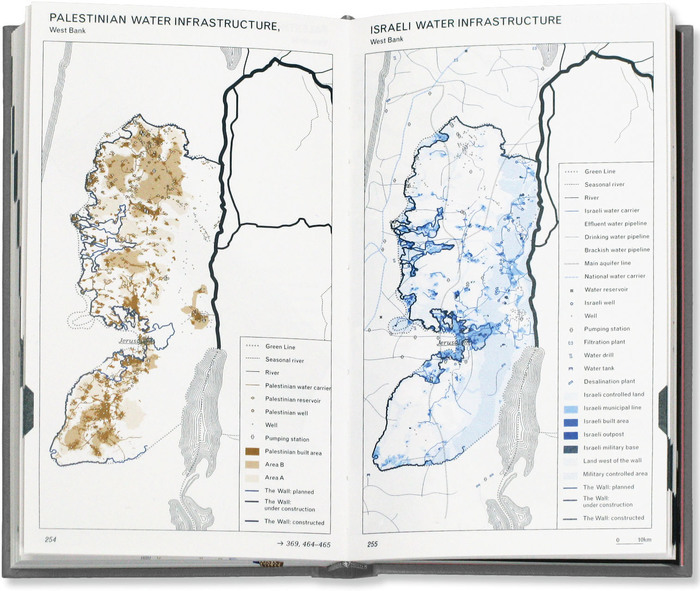 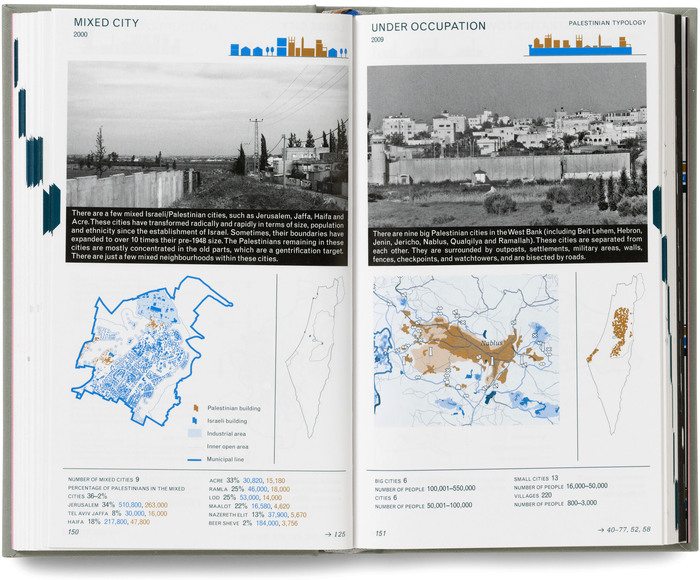 Naturally both parts are clearly distinguished by layout and structure of content, but also by the typeface used. The map-section is almost entirely set in Monotype Grotesque, a fairly common pick among book designers, at least in the Netherlands. But putting the rather scarcely seen Egyptienne F to its side adds an interesting touch to it.

Designed in 1956 by Adrian Frutiger for Deberny & Peignot, Egyptienne F is a slab serif with sturdy bracketed serifs and broad proportions. Those traits, together with its large x-height, makes the typeface very suitable for small sizes and demanding printing conditions. Although the family consists of only four styles I could recommend it for similar text-heavy and complex applications, since its bold is distinct and the italic very legible as well. The emphasis in the text here is made in the medium weight though, which I think is a bit too weak an accent (see place names at the beginning of the paragraph in the image below). Linotype fonts from this era have unusually wide and generously spaced italics because the foundry’s metal type required both roman and italic (or bold) styles to fit on the same matrix. This would look odd in bigger sizes but is great for the tiny font size of the captions and place names in the maps.

Egyptienne F shares its calm, rather closed form model and proportions with two other typefaces by Frutiger, Univers (designed around the same time) and Serifa (1964) and thus would make a perfectly harmonious companion to those. But the more idiosyncratic Monotype Grotesque family gives nice extra spice.

This classic sans serif from 1926 was drawn by Frank Hinman Pierpont who based his design on Ideal-Grotesk, 1908 by Klinkhardt and William Thorowgood’s Grotesque of 1834. Monotype Grotesque comes in 14 styles, weights and widths, each with distinct peculiarities and many put to use in the book — the roman for text, italic for pagination, bold for titles in the tables, the condensed styles for source citation and, most notably, the very rare Display Bold Extended for headings. Compared to the normal Bold Extended this variant has less stroke contrast (as opposed to serif display styles) and different uppercase letters.

Coincidentally it was just announced that “Atlas of the Conflict” won the “Golden Letter” (1st prize) in the “Best Book Design from all over the World” competition out of 596 of the best books from 32 countries. For more about Joost Grootens’ work see his recently published monograph “I swear I use no art at all”.

Images by Joost Grootens and 010 publishers.

4 Comments on “Atlas of the Conflict”

More Monotype Grotesque in use

Daido Moriyama – How I Take Photographs2019