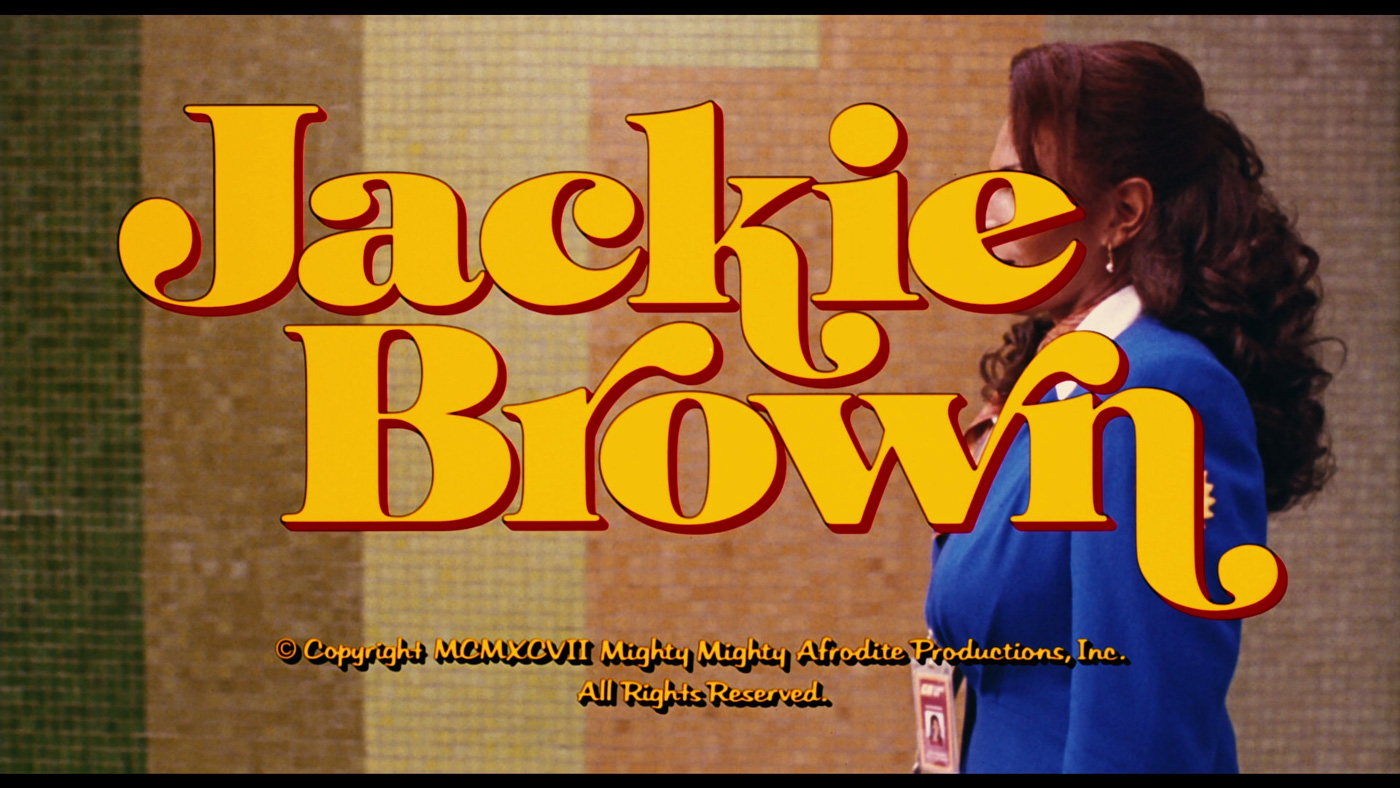 The main title from Jackie Brown. The small type appears to be based on Imperator Script or Filmotype Hudson. Image via Christian Annyas, whose Movie Title Still Collection has more from the opening credits. 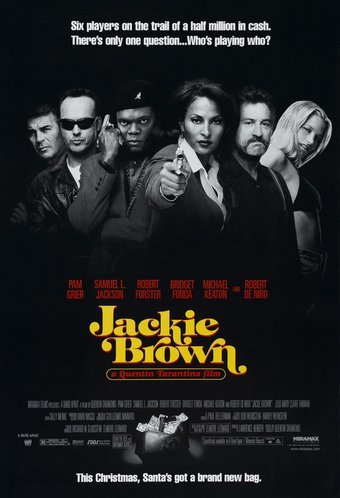 Quentin Tarantino’s 1997 film, Jackie Brown, starring Pam Grier, is an homage to the blaxploitation genre of the 1970s. The film’s name — and its logotype treatment, used prominently in the feature’s promotional materials and opening titles — is a direct reference to Pam Grier’s 1974 film, Foxy Brown.

The basis of the Jackie Brown logo is ITC Tiffany, designed by Ed Benguiat in 1974. (More of ITC Tiffany can be seen in the Collector’s Edition DVD packaging.) But the swash ornamentation that gives the logo its funky distinction (see ‘k’, ‘B’, ‘r’, ‘w’, ‘n’) is inspired by other exaggerated display serifs of the phototype era. The chief reference is likely another Benguiat design, Caslon Black Swash (AKA Benguiat Caslon), which was used for the Foxy Brown promotional material (below). Incidentally, the prolific Ed Benguiat is also the artist responsible for the lettering of the famous Superfly logo.

Below the Jackie Brown title, “a Quentin Tarantino Film” is set in Goudy Heavyface, Lanston Monotype’s response to the popularity of Cooper Black. 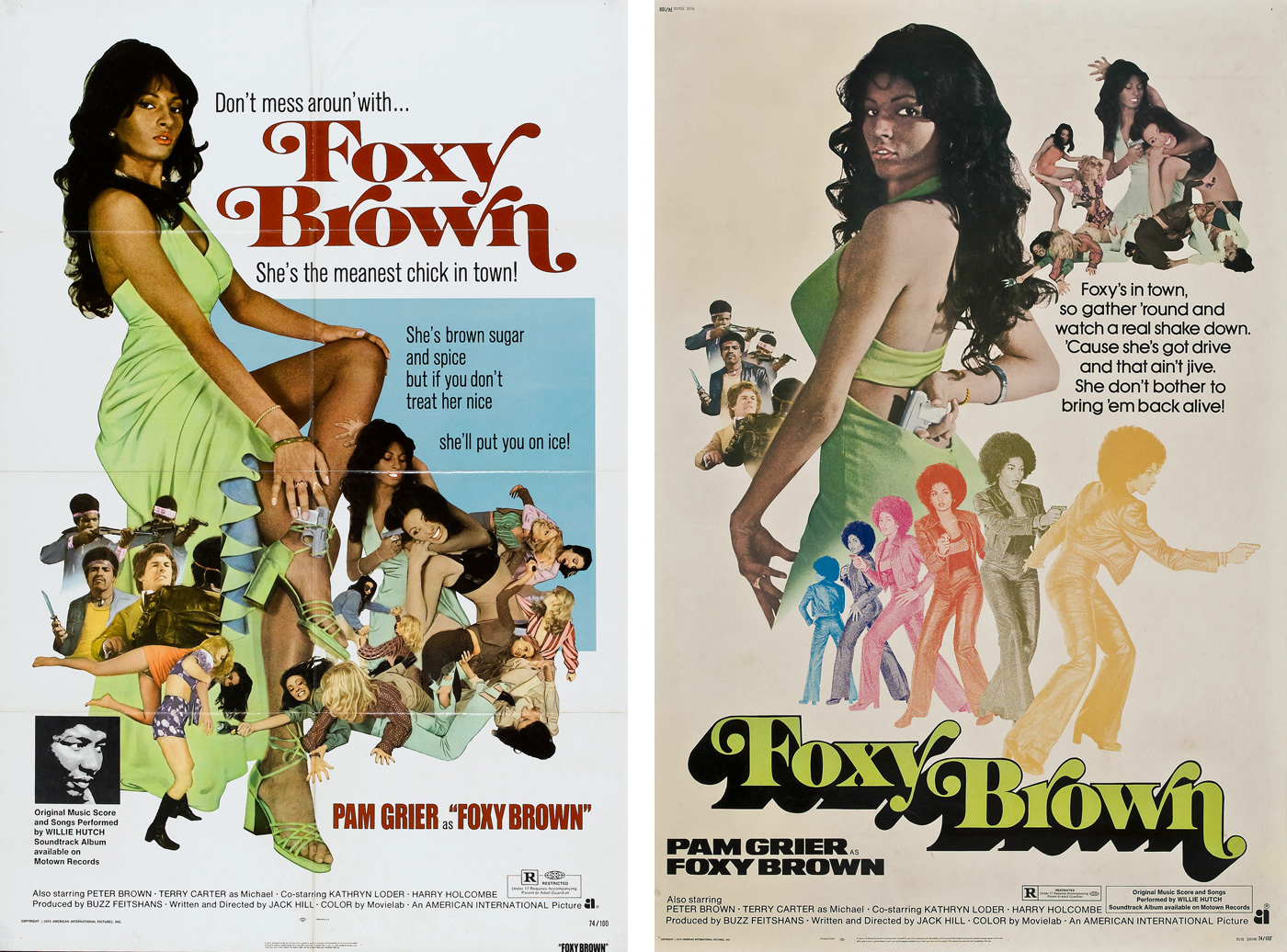 Posters for Foxy Brown (1974). Logo at left was mechanically stretched, as was often done in phototypesetting. The poster on the right is one of my favorites of all time — dig those rainbow action cutouts. Images via Una Pagina de Cine.

Various online sources mistakenly identify the Foxy Brown type as Cabernet, but that’s not accurate as Jason Walcott’s face is purely digital, a 2003 interpretation of Benguiat’s Caslon. This kind of misattribution is commonly made these days, overlooking metal or photocompositor typefaces that haven’t been digitally released under their original name. I’m as guilty of this as anyone and I’m gradually wising up as I learn more about analog type. Still, from a practical view, it’s certainly useful to know what fonts can be used today that emulate the pre-digital work.

This image from Daylight Fonts is labeled as Benguiat Caslon but appears to be Cabernet, with its additional swashes created by Jason Walcott. Some of these were probably inspired by the custom modifications that PLINC made to order.

The most official digital version of Benguiat Caslon is now available through Photo-Lettering.com, House Industries’ revival of the 1950–80s film font service that lets you set a line of type and pay for just that set of words rather than the font itself. For customers, the advantages of this system is a much lower cost of entry, and effects like shadows and fills are easier to apply.

Seeking to keep Benguiat Caslon as close to the original as possible, restorer Christian Schwartz digitized everything on the film font source and added very few new glyphs. This means it lacks many of the extra swashes (particularly lowercase) found in Cabernet. Most of these appear to be Walcott’s own inventions inspired by the custom modifications that were often made by PLINC lettering artists upon their customers’ requests. Another, less refined, digital tribute is Emfatick NF. 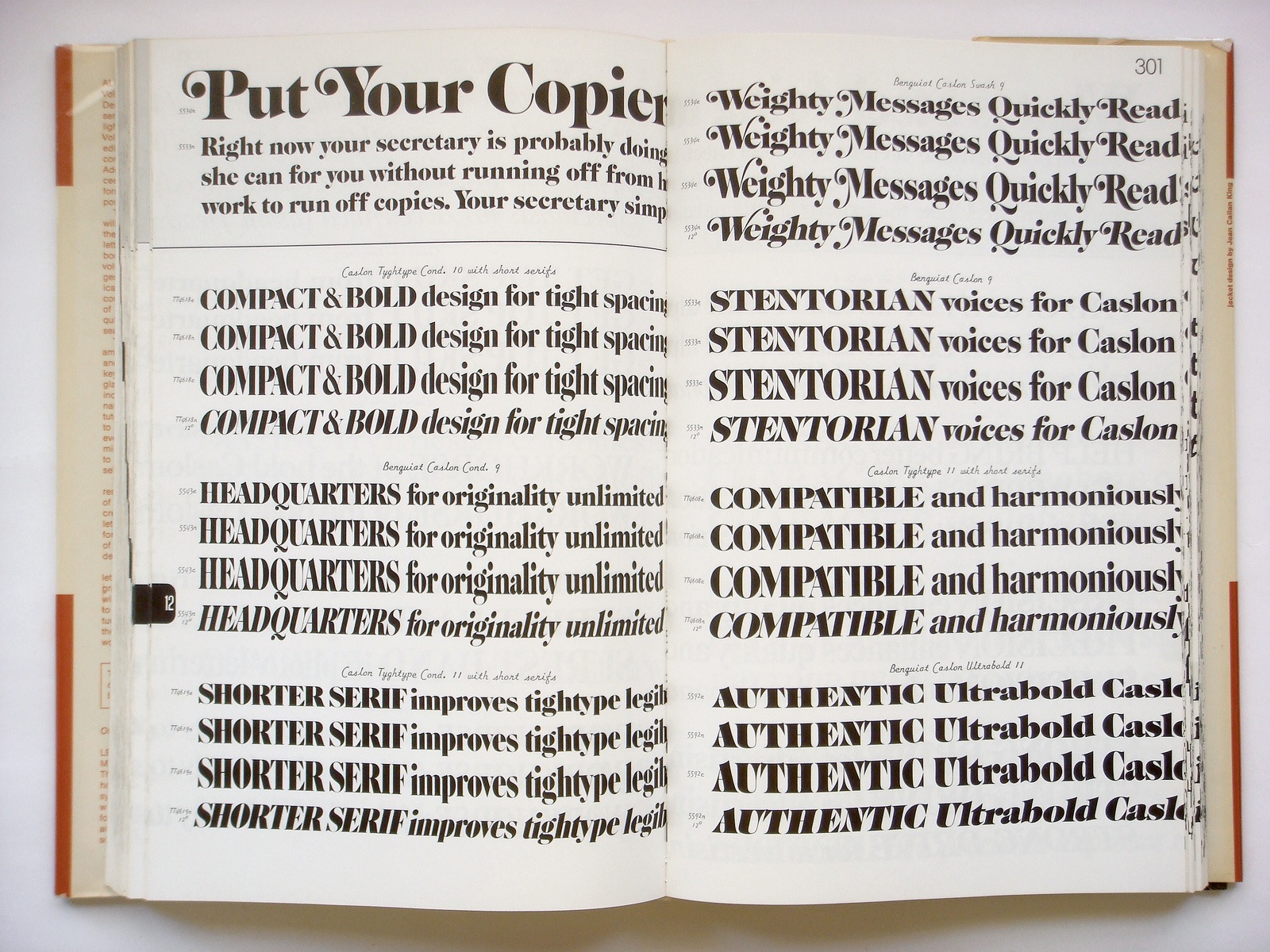 Benguiat Caslon Swash in Alphabet Thesaurus, Volume 3, the 1971 catalog from Photo-Lettering. Note that the second line in each sample is the original drawing. Other lines are mechanically scaled or slanted, a technique facilitated (and encouraged) by phototypesetting technology. Photo by Nick Sherman.

Update: The initial version of this article asserted that the Benguiat Caslon available at PhotoLettering.com was not complete. Christian Schwartz, who was responsible for that digitization, corrected me and reminded me that custom modifications to film fonts were common: 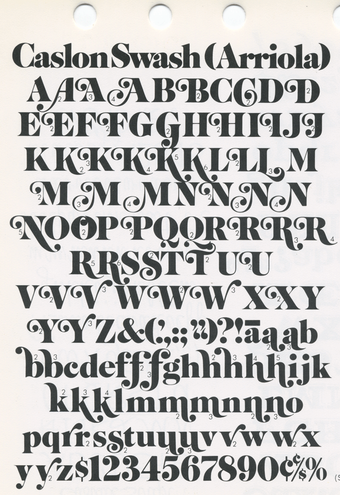 Caslon Swash (Arriola) as shown in the 1980 catalog of Phil’s Photo. The design is not credited.

At PLINC, the films were really just a starting point, and the lettering artists there would modify and add alts and swashes as they saw fit, or as the art director speccing the type would request. The ‘r’ from the Foxy Brown logo, for example, was probably drawn just for the logotype.

I’ve updated the article to reflect this.

It’s also possible that the designers used a font from another provider. Knockoffs and followers were as common in phototype as they are today. At right is a scan of a very similar font called Caslon Swash (or Arriola) from the 1980 catalog of Phil’s Photo, Homage to the Alphabet. It includes all the variations found in Foxy Brown and Cabernet, and then some. That’s not to say that all of the wacky extensions are good ideas, or even very well drawn. The alt ‘O’, for example, is particularly shoddy. I can hear someone from the back of the room yelling, “Fo-cus!”.

More ITC Tiffany in use

The Shuttered Room and Other Tales of Horror by H.P. Lovecraft and August Derleth (Panther, 1970)1970

The Trials of the Lancashire Witches (David & Charles)1972