We’re not the only geeks who analyze typeface choices. Laura Meseguer did it with magazines in her 2010 book. “TypoMag” is an idea after our own heart. It’s the first in a series of books devoted to the use of type in specific design environments. Splitting her time between editorial and typeface design, Laura Meseguer is the ideal curator for the project. She was assisted by Floor Koop, Claudia Parra and Luis Mendo. 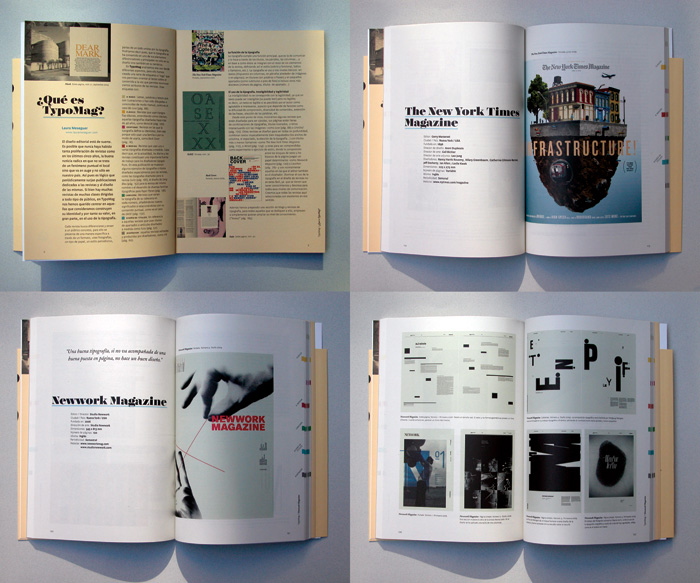 29 international publications on a variety of topics are showcased in the book’s 144 pages, each one selected for their inventive typeface choices and implementation. The magazines’ designers reveal the motivation behind their picks in a short text accompanying each example. Meseguer has agreed to share a few of the selections with us here on Fonts In Use, so expect that in the coming weeks. In the meantime, I thought I’d cover the book itself, a fine example of typography in its own right.

The logo is a modified version of Poster with more contrast and a ‘g’ that descends lower to contain the subtitle. The typeface, by fellow Spaniard Iñigo Jerez, is available from Meseguer’s foundry Type-Ø-Tones, and a Display version inspired by the TypoMag logo will be available soon. 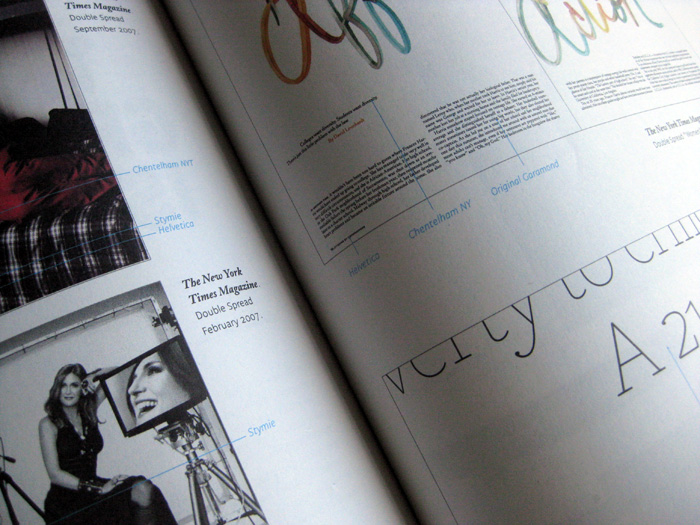 The old reliable Adobe Caslon is used for running text. Meseguer keeps things fresh with FF Legato for sidebars, navigation, and other informational content. If there is such a thing as a type critic’s darling, FF Legato is it. And deservedly so. It was created by the type designer’s type designer — the highly original and inventive Evert Bloemsma — shortly before he passed away unexpectedly in 2005 while he was still in his prime. FF Legato abandons the conventional wisdom and tradition behind both handwritten and constructed letterforms, focusing instead on the idea of “word images”. When Hrant Papazian selected FF Legato for Typographica’s “Favorite Typefaces of 2004”, he wrote:

Evert Bloemsma’s Legato typeface is something truly new, which is extremely rare. Its essential attribute is that the black of the individual letterforms is made equal in importance to the white inside and between the letters. It does this by disposing of the linking between the two edges of the black, something inherent in the conventional forming of shapes derived from a marking tool, such as the broad-nib pen.

By making the black and white harmonize, Legato approaches an ideal of readability, since reading involves the perception of positive/negative space as one thing. Also, it does this while still appearing conventional to the reader — a key feature in any text face. All this makes it the best typeface of a much longer period than just 2004!

Excerpt from a PDF created by Evert Bloemsma upon the release of his typeface.

More Adobe Caslon in use

Invasion of the Robots by Roger Elwood (ed.)1969

The Network of Fate by Dalia Ali2021