IBM celebrates its first century with a series of typographically sensitive articles and films.

IBM turns 100 this year. Along with publicity magnets like Watson, the company has produced a series of creative projects celebrating their history. A lot of this stuff — produced with the help of their agency Ogilvy & Mather — is very nicely designed, with an attention to typographic detail that is uncommon among massive conglomerates.

100 Icons of Progress tells IBM’s stories of technological innovation through icons and clean, open pages designed for reading. Typographers will dig the feature on the Selectric Typewriter, but the article fails to mention Howard “Bud” Kettler or Courier. IBM plays it safe on these pages, using Georgia for text and headlines, Helvetica for trim.

The type is more varied in Ogilvy & Mathers’ series of documentary films that “chronicle the ways in which IBM has changed the world through scientific and technology achievements”. “100 x 100”, by celebrated commercial director and Gandalf-coiffed Joe Pytka, features one hundred people who describe an IBM achievement that took place the year they were born. The film functions like a sort of kinetic timeline with each year represented by numbers from a piece of ephemera, or an object from the respective period. Each set of numerals is a beautiful and instructive window on the technology and trends of their era. 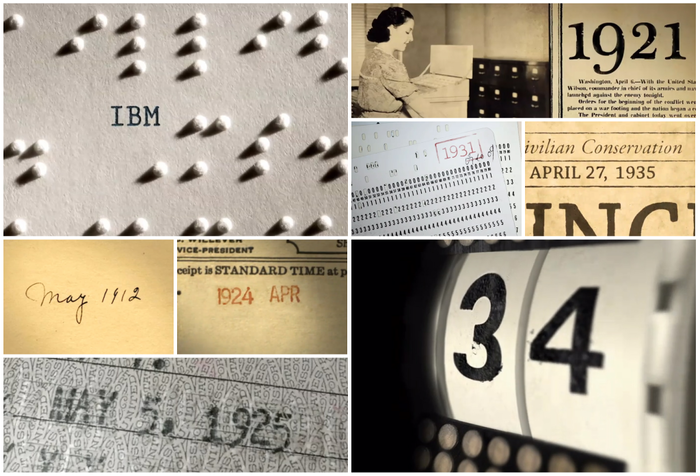 The first part of the century is marked by numbers that don’t come fonts, per se: script handwriting, rubber stamps, and mechanical counters. But there is some type at work in advertising and newspapers, as well as typewritten documents presaging Courier and other typefaces inspired by typewriters. 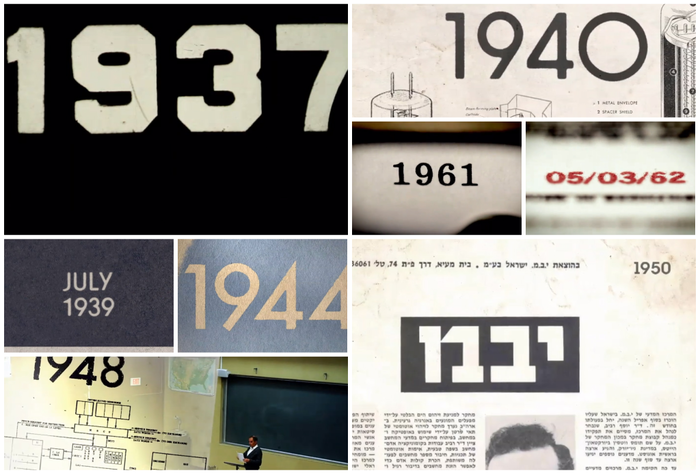 The late 1930s and ’40s demonstrate the popularity of Futura and its followers, including Twentieth Century, Spartan and Tempo. Some (or all?) of these historical bits were likely recreated. This is usually done very skillfully, without anachronism. An exception is ITC Lubalin Graph, which seems to make an appearance as the “1950” despite not having been created until 1974. It doesn’t feel too wrong, though. Geometric slabs that are truly of that era, like Rockwell and Stymie, have a serif on the ‘5’. Memphis is more condensed. 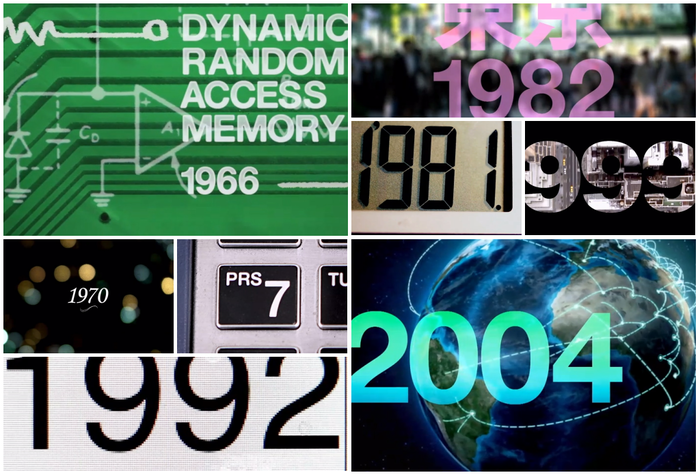 Other than the LCD of a calculator cleverly representing “1981” and some subtle, centered Times, the years after 1965 are dominated by Helvetica. This is mostly due to its role as an identity typeface for IBM, but it’s also a reflection of the conformity that has inflicted the corporate landscape over the last five decades.