Readmill is an e-book reader with “social features”. (The app is in invite-only beta, but the developers have offered Fonts In Use readers a batch of invites.) Sharing the books you’re reading, especially discussing excerpts with friends, is a swell idea, but what excites me most about Readmill is its thoughtful design. The brand is a lesson in how to create a consistent experience across multiple devices. 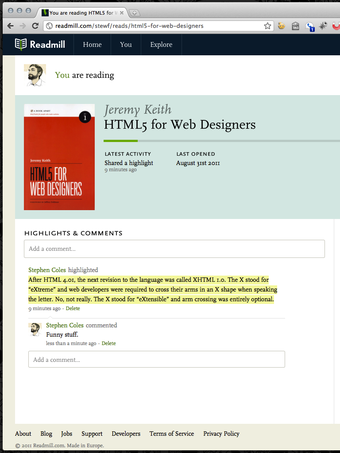 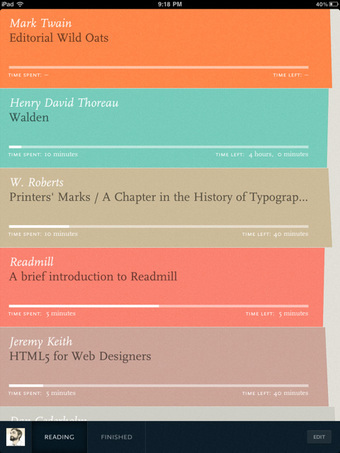 The library screen from the Readmill iPad app. Click to enlarge.

The website and app are a uniformly pleasant experience with elegant typographic touches on nearly every page and screen. This is due in large part to FF Scala. The typeface, served as a webfont, is used throughout the website for all text, and embedded in the iPad app for all UI elements and the book text itself. This makes Scala an integral part of the Readmill identity.

The digital Bembo (Adobe, 1990), a typeface frequently used for book text, is much more delicate than FF Scala, often falling apart on even the printed page, let alone low-res screens.

It was a smart pick. Martin Majoor’s design is an obviously modern take on a Garalde, a class of type commonly used in books, making it a fitting agent for the very concept of digital literature. Its physical characteristics serve it well on low resolution screens, too. With simplified shapes, low stroke contrast, and relatively heavy, unbracketed serifs, Scala is virtually built for e-reading. The type retains its character and remains legible whether large or small.

The small caps from FF Scala Sans supplement its serif companion throughout the site and app. Used for UI elements and small labels and other bits of text, the font offers sufficient but not jarring contrast to Scala.

As for the reader itself, Readmill keeps things simple:

There isn’t an infinite number of fonts, margins, line-heights and number of columns to choose from. We have taken everything we have learned so far into consideration and made three options: small, medium or large.

Readmill offers three type sizes, but the amount of text per line remains the same, resulting in a very narrow column.
Click to see at actual size.

In theory, I admire this approach. Just because e-books let the user format text however they want, doesn’t mean one should overwhelm them with options. Unfortunately, I can’t agree with all of Readmill’s decisions. The linespacing is good, generous but not too airy. You’re forced into full justification — a mistake Apple made with iBooks and corrected later by offering a (albeit hidden) ragged right option — but there is hyphenation, keeping word spaces generally even. The bigger problem is Readmill’s fairly narrow line length that is the same in all three text sizes. It seems like the designers are overcompensating for the excessive line lengths one gets in other readers when reducing the font size. The measure they chose is ok for short passages — like those we read on the web — but it’s too narrow for book text. An ideal page would have a font size between Readmill’s small and medium with 50% smaller margins. Hopefully they’ll consider this in a future version.

The good news is that Readmill has none of the silly physical metaphors that plague iBooks. The standard view is free of page turning animations, binding curve effects, or edges of a fake book cover. All you see are simple setting and navigation buttons in the top margin and a position indicator at the bottom. With a tap, even those bits disappear and you are left with nothing but the text. There is no landscape view yet, but with the app in early stages of development I’m sure it’s not far off.

The Readmill logo, designed by Viet Cuong Truong, uses FF Super Grotesk, an interpretation of an East German design by Arno Drescher. With angled terminals on a few of its caps and alternate humanist ‘a’ and ‘g’, Super Grotesk is a warmer Futura. In fact, Super Grotesk was the DDR’s Futura as the original was unavailable in that part of Germany.

More FF Scala Sans in use